I have had the unique opportunity to work with a young man in Bangalore, India for the past year. Binu Verghese is the technical part of our team handling the upgrades, configurations and troubleshooting of the Auto-Discovery tool we manager together. Between the two of us, we can tell anyone what is running on our network infrastructure at any given time. Pretty cool tool, but that is not the purpose of todays post.

The best part of this partnership is learning about each others lives. So, here is God’s sense of humor! We figured out early on in our partnership that we are actually “family” members. No not earthly family, but God’s family. In a country that is 80.5% Hindu, Binu and his family are “Born Again Christians”. He attends Bethel AG Church – @pastorjohnsonv in Bangalore. The world just keeps getting smaller and smaller and smaller. It’s awesome to have a brother on the other side of the world praying for me as we work together.

As Becky and I waited for Elise to join us in this world, Binu and I shared the waiting game together. He and his wife Christie were waiting for the birth of their first child. So in October, Danny Verghese was born in India.
With Binu’s permission, let me introduce you to Danny Verghese and of course, Mom Christie

Posted by rogerbayne on March 24, 2014 in Family Stuff, Nashville Experience

A night on the town

On a cold evening in December, I finally made it to the Ryman!

Thanks to our wonderful future Daughter-in-law, Ashley, we were treated to the Andrew Peterson “Behold the Lamb of God” Christmas concert.

As Andrew enjoyed stating last night, he and Ashley are second cousins and he need a violin player for the Nashville shows. Seeing she is a superb violinist, she got the call.

So we got to enjoy the show, see her play and I got to see the Ryman for the first time.

Posted by rogerbayne on December 13, 2013 in Family Stuff, Nashville Experience

Saturday August 24th turned out to be a beautiful weather day and a wonderful day for a drive. So into the care Mom, Dad, Becky and I went to head to Fall Creek Falls State Park. 2 hours later and a number of winding roads we found the park, the falls, the gorge and the suspension bridge.

After enjoying a picnic by the lake we found the main falls, which I must say, didn’t have a lot of water flowing, but then again it was water and it was falling so it was a “Water Fall”. Then we drove around the gorge stopping at numerous spots to enjoy the view and take pictures. All the views were spectacular.

Then we found a suspension bridge. It reminded me of the bird cage bridge from the 3rd Jurassic Park movie. After making it across, it was much easier to make the return trip.

Another day filled with laughs, memorable moments, and of course, pictures

Posted by rogerbayne on August 24, 2013 in Family Stuff, Nashville Experience

…….but fun day at Leipers Fork with mom and dad

Posted by rogerbayne on August 4, 2013 in Family Stuff, Nashville Experience

Last night Becky and I had the privilege to spend the evening with about 3000 people. Most of them we did not know, well, really we only knew one personally and that was Jeremy. Because he was one of the technicians for the Show Hope 10th anniversary celebration #sh10yr . The evening was a concert orchestrated by Steven Curtis Chapman and his wife, Mary Beth Chapman. The celebration of 10 years of Show Hope. 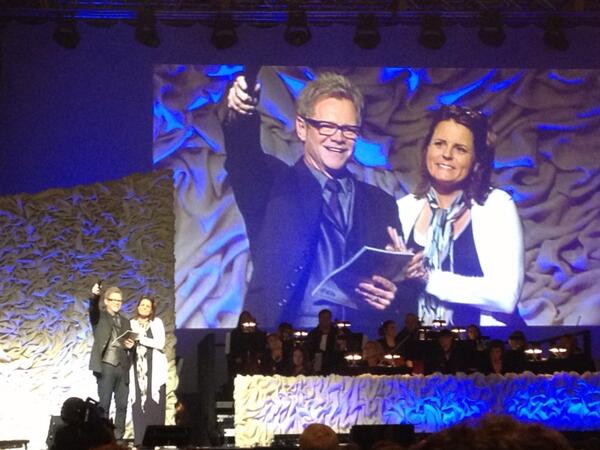 Established in 2003 as Shaohannah’s Hope, Steven Curtis Chapman and his wife, Mary Beth initially founded Show Hope out of their desire to see more children find their way into forever families.  Though many families they talked to were willing to adopt, the financial costs to adoption were simply too high.

Originally named after the Chapman’s first adopted daughter, Shaohannah Hope Chapman, Shaohannah’s Hope has grown far beyond the initial vision of helping a few orphans find homes. In 2009, after changing the name to Show Hope, this organization has seen an amazing explosion in growth. From a six-story caring facility in China, equipped to provide surgeries and medical care to special needs orphans, to multiplying the effects of the adoption grant program by assisting churches in setting up their own adoption funds, Show Hope continues to expand its remarkable worldwide impact.

What a great show for a great cause. A great 3 hours of entertainment, laughter, praising God and just seeing these people as, well, normal people performing unscripted, live.

Below is a list of those that performed or provided support for the show.

The important ones first! There were  many families that have adopted these children in attendance as well as personal stories.

Entertainment and support:
Steven Curtis Chapman and his wife, Mary Beth Chapman
Laura Story
Andrew Peterson
Audio Adrenaline – Mary Beth shared how their hit, Big House, helped bring their daughter Maria to ask Jesus into her heart. Little did they know that a few shorts months later she would be with Jesus.
Casting Crowns – Shared how SCC helped them write and produce their first hit
Geoff Moore
Parts of the Nashville Symphony
Tim Tebow and the Tim Tebow Foundation – Tim announced that the foundation is making it possible for the Barrett family to adopt their third child from China with special health needs. Who is the hero now!
CTS Audio ( Jeremy Connection)
Lipscomb Allen Arena
Others, that I do not know

Posted by rogerbayne on May 27, 2013 in Family Stuff, Nashville Experience

We continued our time with Kim and Al on Friday by spending the morning at the Gaylord Opryland Convention Center. After a cold front came through during Thursday evening, it was nice to spend the morning inside. It is always nice to walk through the convention center and see what they have added. It also gave Kim and Al the chance to buy some gifts and souvenirs.

Not willing to give into the weather, we headed downtown for some Friday night dinner and lights. This was the coldest day we had while they were here, but with warmer jackets and a willingness to brave the winds, down we went. After dinner at the Rock Bottom Restaurant & Brewery, we spent the evening walking around town enjoying the sights and sounds of the Friday night in Nashvegas.

Then Saturday we set the alarm clocks and headed down the road to Lynchburg, Tn., for a visit to Jack Daniels Distillery and a walk around the town. Yes April, I took your mom and dad to a distillery. What another beautiful day we had. The temperatures were in the mid 60’s, the sun was shining which kept us warm. We had a tour guide that reminded Al of Junior Samples of HEE HAW days.

We had a great time and this guy was a wonderful story teller. After the tour we wondered around town and into the gift shops. We had a wonderful BBQ lunch at BBQ Caboose in Lynchburg with live music and a visit from the owner. After wrapping up some more souvenir shopping we headed home.

We finished our week eating dinner with Jeremy and Ashley out on the patio and a nice warm fire in the upper woods. Ashley tried her best to Aunt Kim to share some blackmail stories about me from my childhood, but somehow she just couldn’t come up with anything

. We reminisced about how Kim and Al met and about their first apartment.

We bid them goodbye after a Sunday morning pancake breakfast and some final laughs. What a great week… We watched baseball, even Yankees on my TV

, we learned a lot of Nashville and Southern history, ate a lot of southern cooking and just caught up with each other.  6 days was way to short to catch up after 3.5 years, but we did our best.

Almost forgot that we stopped at Fort Negley, Belmont and the Marina as well.

Posted by rogerbayne on April 21, 2013 in Family Stuff, Nashville Experience

Posted by rogerbayne on February 2, 2013 in House and Home, Nashville Experience

Snow in Mt. Juliet Tennessee – This is just the perfect amount for me. I see it, I enjoy it, I watch it melt by mid morning.

Yes for those of you seeing this from north of the Mason-Dixon line, schools are closed as a result of this “Dusting”

I blame it on Jeremy… he purchased his new (used) car yesterday and it’s covered in a blanket of snow today.

Posted by rogerbayne on February 1, 2013 in House and Home, Nashville Experience

What an awesome Sunday afternoon around the fire. Then burgers grilled over the hot coals.

Posted by rogerbayne on December 30, 2012 in House and Home, Just Thoughts, Nashville Experience

Jeremy has been traveling with them for the past month and with Nashville being the being the final show, it gave us the opportunity to attend. It is always a joy to be able to see the fruits of his hard labor and to enjoy an awesome Christmas show and to hear the Gospel front and center makes it all the better.

We have been hearing about Eliza the entire month. Below is the song they wrote for her that we were able to hear last night.

To top the evening off, Sarah and David arrived for Christmas and were able to join us for the show.